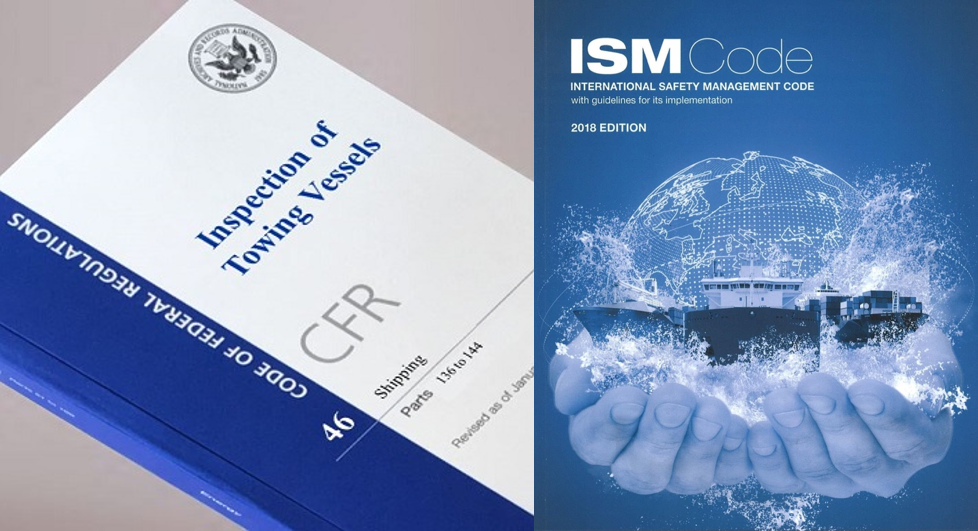 Key Differences Between the ISM Code and Subchapter M

The ISM Code requires shipping companies to implement a safety management system designed to should ensure safe operating practices and should be complied to worldwide – tugs, however, are mostly not required to do so. However, in the U.S., U.S.-flag towing vessels should comply to Subchapter M. This blog provides insight on the similarities and differences between the two.

Though the ISM code may be applied to all ships, it is not an obligation for all ships, and most tug boat companies are not obliged to implement a safety management system as per IMO regulations.

However, U.S.-flag towing vessels that are engaged in pushing, pulling or hauling alongside are subject to Subchapter M. This part of the Code of Federal Regulations was developed as a response on, among others, two major towing vessel incidents in U.S. waters in the early 2000’s. In the first major accident five people died when their vehicles went into the water when a bridge collapsed after being struck by a towing vessel. In the second major accident, 14 people lost their lives under similar circumstances.

After these two major incidents the Coast Guard and Maritime Transportation Act of 2004 reclassified towing vessels as vessels subject to inspection and specific requirements were established for a safety management system.

Similarities and differences between the ISM Code and Subchapter M

The ISM code clearly emphasizes the need of having a process for risk assessment in place. This is also stated in Subchapter M, as an element of the Towing Safety Management System (TSMS) and has a particular section on the identification and mitigation of health and safety hazards.

Subchapter M is more detailed than the ISM Code, as it advises on the steps to be taken in the preparation phase of the towing operation, such as the selection of the appropriate vessel that has adequate maneuverability and horsepower and the selection of appropriate rigging and towing gear.

Further, Subchapter M addresses several high-risk tasks (e.g. confined space entry, working aloft), specific workplaces, high-risk conditions on board and equipment. With this, guidance is given on what type of risk controls should be selected in order to eliminate risks.

This and much more is discussed in the new third edition of the book Tug Use in Port, written by Henk Hensen. The chapter on ‘balancing safety’ which involves various subjects such as risk management, safety management systems, and the ISM code and Subchapter M is a contribution of Jan-Hendrik Hensen and Karen van Vliet.

The large-format hardback book is illustrated with a wealth of detailed diagrams, graphics and photographs. The book can be ordered at a price of €45 at The ABR Company Limited.